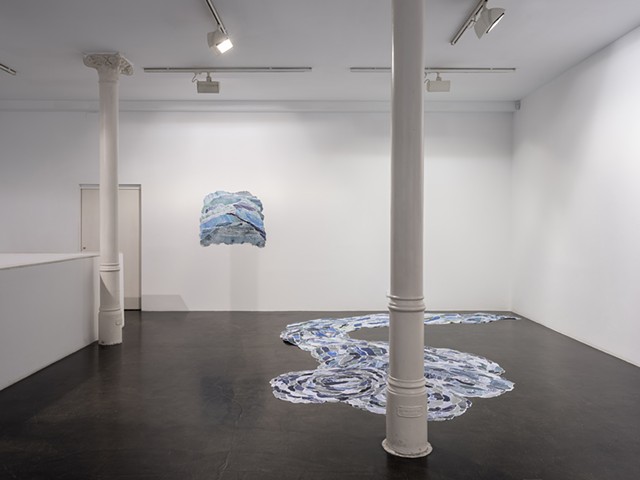 "Multidisciplinary artist Evelyn Rydz uses water as part of her artistic practice, turning to rivers and oceans as both pictorial source and physical material. Newly created for The Memory of Water, her large-scale Open Oceans Together/Apart is composed of photographs pieced together to simulate the flow of water across the gallery floor. Cut into variously shaped forms, each photograph reflects the surface of bodies of water from across the Americas, ranging from rivers and tributaries in the Boston area where Rydz lives and works, to the to the coasts of Colombia and Cuba, the regions from which her family is from. Such sources not only reference the artist’s own personal biography, but also speak to larger histories of im/migration, trade, and industry, as well as the particularities of climate. As a whole, these images form a new body of water that speaks to global connections; yet, as intimated by the work’s title, each nevertheless maintains its individual nature. Such internal tensions are illustrated by the waves and currents that are arranged so as to move in different directions from one another, endowing the piece with a sense of tense dynamism.

Similar effects are also evident within Rydz’s Aguas Dulces/Aguas Saladas, smaller scale collages hung on the wall. Like Open Oceans, these works also combine various photographic images of marine surfaces as well as watercolor. This addition references Rydz’s wider process of working between artistic mediums, in which she translates photographs into watercolors and painstakingly created drawings. In Aguas Dulces/Aguas Saladas, the two media are combined and layered to produce an ombre effect. Rydz embellishes these surfaces through the addition of saltwater, which dissolves into organic and crystalline patterns. As literal stains, they further allude to the histories – and traumas – embedded within water."